“...their comedy fitting in nicely between the classic rock'n'rollers”...The Stage

“Great vocals, playful retro cabaret - There’s no getting away from it, The Kitsch Kittens are a lot of fun. Tamsyn Salter and Emma Ruth are charismatic performers who, in the guise of singing duo Barbie and Sindy, revisit to fine retro effect the girl vocal numbers of the 50s and 60s. With plenty of savoir faire in handling an audience, and strong musical skills on their side, they’re well placed to create a thoroughly entertaining evening. There’s comic patter too, but what really wins is the unselfconscious tongue-in-cheek humour that underpins the actual delivery. Whilst they clearly enjoy their audience The Kitsch Kittens manage to do so without a trace of self-serving vanity. Their material works, in short, because the performers serve their roles well and not the other way about.”... 4 Stars Remote Goat, 2013

“...the highlight of the evening, The Kitsch Kittens, a female duo who have obviously put a lot of work into an original act which focuses on fifties-style kitsch. As Barbie and Sindy, wriggling in their pink dresses, they spout slick comic patter between strong vocals and well rehearsed harmonies. Songs like Leader of the Pack are sold impressively well, along with a highly entertaining British sixties medley. Refreshingly different.”...The Stage

“If you love the Pippette's, the Puppini sisters, the Shangri-Las or you just enjoy high kitsch camp than you'll love The Kitsch Kittens. The duo belted out classic Christmas hits from the school of Phil Spector with aplomb. Even on a cold, rainy December night they managed to create nostalgic festive cheer by the bucket load. The Kittens clearly relish performing and enjoy taking the audience on  a journey to discover the 'real' meaning of Christmas in under an hour. Their comedy is high but not heavy camp, a light relief from the relentless build up of the festive season. Delivering blessed relief from the musical dirge pumped from high street shops year in year out, this show is guaranteed to fill you with Christmas cheer and put a broad nostalgic smile on your face”...The Remote Goat

“The Kitsch Kittens are like eating more candy floss than you should, this is a confectionary of a cabaret, so saccharine you can't avoid getting a sugar rush. The honey-voiced duo, in the kitschiest gingham costumes, are here to show-off their US holiday snaps, the predatory pair may well target you for a personal rendition of their camp classics right into your face - more like amorous tigers than kittens. The revealing skin-tightness of their Vegas costumes has to be seen to be believed and see it you must, as you only have one more chance to taste this camp camp candy” ***** Three Weeks

“Barbie and Sindy sing and regale the audience with their trip through America and the many pit stops of Popsicles and men though song (the girls really can sing too!), retro slides, and tongue in cheek humour. Expect to laugh, sing, clap, dance, cower in fear at being pulled up on stage, and to laugh some more (especially at the guys pulled up to shake maracas). The Kitsch Kittens: a camp knockout.” ****Latest 7 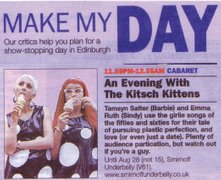 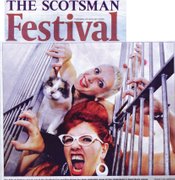